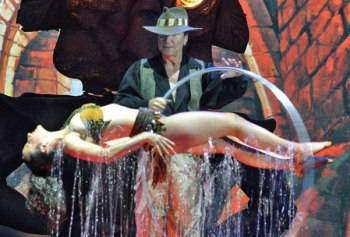 "Watch in wonder as I pass this hoop completely around her!"
"Not much experience, but she knows the basics. She knows how to present herself, and a pretty assistant’s the most effective form of misdirection."
— Cutter, The Prestige
Advertisement:

In showbiz, you have the male performer and his lovely assistant.

A Lovely Assistant is just that, an attractive young woman who assists the performer or primary host. This can be by fetching things, being the object of whatever the performer is to do, giving out prizes, handling the lottery equipment, distracting the audience's attention away from a magician's skullduggery, or doing minor performances herself. They are almost Always Female (even if the magician is female herself).

But primarily, her job is to look good, strike attractive poses, and give the performer room to do his thing. The clothing can vary from modest but sexy to outright Stripperiffic.

A variation appears in a Stage Magician's show, where there are practical reasons for small, female assistants in tight-fitting clothes. Some physical-displacement type tricks (moving boxes, sawing a person in half) require the person to be quite small in order to fit into the device (most magic equipment is designed for an assistant who's 5′2″ tall). The same is true of quick-change acts, where the model must be small enough to wear many layers of trick clothing without appearing bulky. In these cases the "assistant" is an integral part of the act who requires skill and training, but plays off the audience expectations that she is nothing but eye candy in order to set up the trick and make the magician look impressive. A lot of them are also twins, for various purposes.

Some common roles of the Lovely Assistant are as co-host of a game show, a Stage Magician's assistant or object for tricks, or the target of a Knife-Throwing Act.

A Sub-Trope of Distracted by the Sexy.

A Sister Trope to Chorus Girls.

Compare Bridge Bunnies, Foil. Not to be confused with Science Hero's Babe Assistant.