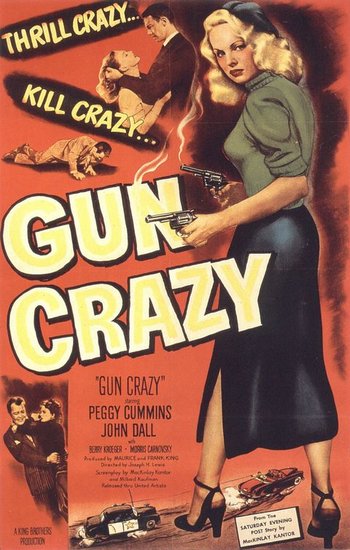 "We go together, Laurie. I don't know why. Maybe like guns and ammunition go together."
— Bart
Advertisement:

It tells the story of an Outlaw Couple of sharpshooters — former soldier Bart (Dall) and circus performer Laurie (Cummins). They are both obsessed with guns, but in a different way: Bart likes owning and shooting them, but would never hurt anyone living, while Laurie dreams of actually killing somebody. When they find themselves unemployed, Bart wants to look for a decent job, but Laurie seduces him into a robbery spree. Soon it ends up with murder, and they find themselves hunted by much more force than they could ever outrun.

It had a loose remake (Guncrazy) in 1992, directed by Tamra Davis and starring Drew Barrymore and James LeGros.

Not to be confused with the Japanese film series of the same name.