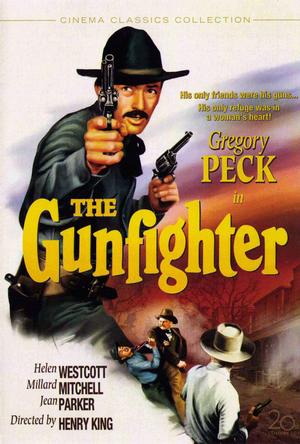 Aging gunslinger Jimmy Ringo (Peck) rides into a strange town where he's immediately recognized. As kids gather at the saloon windows to glimpse the killer and townsfolk gossip about his exploits, the town marshal (Mitchell) tries to keep the peace. He wants Ringo out of town, but Ringo asks for a few hours' grace to visit with his estranged wife Peggy (Westcott), who he hasn't seen in more than eight years, and their son, who he's never seen. Meanwhile, three angry cowboys are on his trail and the town's young hothead is scheming to see just how fast Jimmy is. Ringo only wants to be left alone, to live with his family, maybe on a small ranch away from his reputation. But can he escape that reputation and find peace?

The Gunfighter provides examples of: