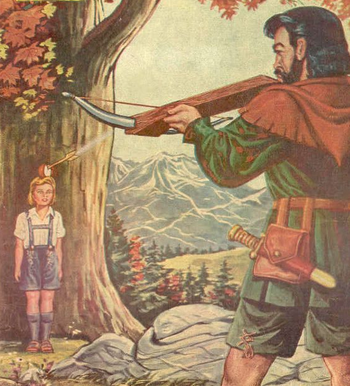 "This fun, all-ages activity brings history alive! All you need is a bow, an arrow, an apple, and an idiot."
— Flavor Text for the Fruit Shoot

Shooting an apple or some other item off another character's head, to show off one's Improbable Aiming Skills. Usually with a bow and arrow.

This is based entirely on the legend of William Tell, though the same story has existed before his time in similar variations. In the legend, William Tell, who originally came from Bürglen, was known as an expert shot with the crossbow. In his time, the Habsburg emperors of Austria were seeking to dominate Uri. Albrecht (or Hermann) Gessler, the newly appointed Austrian Vogt of Altdorf, raised a pole in the village's central square and hung his hat on top of it, demanding that all the townsfolk bow before the hat. When Tell passed by the hat without bowing to it, he was arrested. (In some versions, Tell told Gessler that he didn't know about the law, but then boldly insulted him by saying he'd never have bowed before it even if he had.) As Cool and Unusual Punishment, he was forced to shoot an apple off the head of his son, Walter. Otherwise, both would be executed. Tell was promised freedom if he successfully made the shot. On 18 November 1307, Tell split an apple balanced on top of his son's head with a bolt from his crossbow. Gessler noticed that before the shot Tell had removed two crossbow bolts from his quiver, not one, and after the shot asked him why. Tell replied that if he had killed his son, he would have turned the crossbow on Gessler himself.

Needless to say (and since when has that ever stopped us from saying?), Don't Try This at Home. There's a reason the trope-naming incident was such a big deal: It's shooting a deadly weapon at a small object near a person's head. Mess up, and someone is likely going to become seriously injured or even die.

Sometimes played for laughs like the target suggesting a more suitable fruit on his head, like a watermelon!

A common variant involves shooting something, like a cigarette or a straw, out of the target's mouth. Compare Close-Call Haircut and Hat Damage. Sister trope to Near-Miss Groin Attack, which involves the other end of the body.