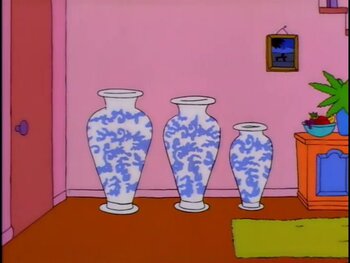 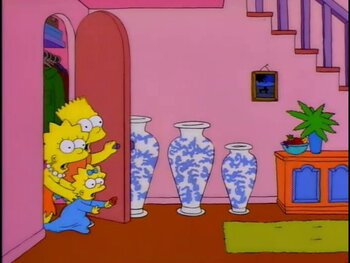 Lisa: Bart, do you think it's safe?
Bart: I don't care. I can't breathe in here.
Advertisement:

The Main Character is being pursued, and is now within a room and needs somewhere to hide. Perhaps they're a spy who's alerted a Conveniently Timed Guard, or a Serial Killer has stalked you in your own home. Either way, they need a hiding place, and luckily, somewhere catches their eye.

The pursuer enters the room, looks around, then notices the obvious place to hide or sign of activity. Perhaps some furniture is covered with a dust sheet, or there's a window that shouldn't be open. Perhaps the air vent cover has been mysteriously removed or at least ajar. Either way it's obvious where the character is. And so the pursuer pulls the sheet or looks outside, and finds... no sign of anything.

Meanwhile, the main character is hiding somewhere less obvious, possibly on the ceiling waiting for either a chance to attack, or for the guard to decide that It's Probably Nothing.

Usually, the audience won't see the switch, so will be expecting the main character to be found where the guard is looking.