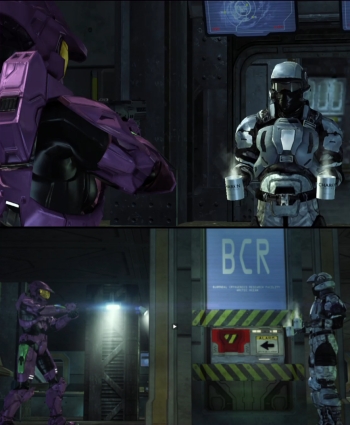 "Don't. Even. Think about it."
Advertisement:

The lead character has just successfully carried out their tricky infiltration of some high-security facility and copied the information/stolen the technology/rescued the prisoner/what-have-you. Just as they're done, in wanders some random security guard, who sounds the alarm. Cue the action sequence.

Basically it's a way for a Spy Drama to have its cake and eat it too. You want to see a perfectly-executed piece of espionage, but you also want to see the lead kicking and shooting and fleeing? Throw in some nicely-timed security personnel and you can have it both ways. Although sometimes you have to wonder, did the question "What do we do about the security patrol?" never even come up during planning? In Spy Fiction, the fact that the enemy would quickly realise that their secret files had been stolen also rarely seems to come up.

Otherwise, this trope is something of an example of Truth in Television. It is surprising how many crimes are stopped because police or security forces happened to show up at just the wrong time for the criminals, or someone saw something and called the police.