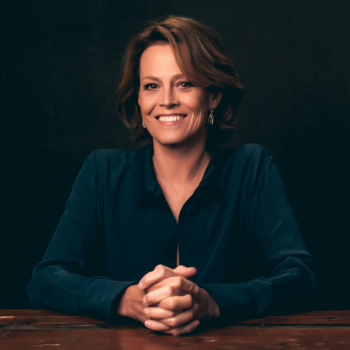 "Get away from her, you BITCH!"
— Sigourney Weaver as Ellen Ripley in Aliens
Advertisement:

She starred in the Alien movies, making her one of the few actresses to headline a successful action franchise. She even got nominated for an Academy Award for Best Actress for the second movie, Aliens. Yes, a sci-fi/action/horror film, something that then and now is practically unheard of.

Her reprisal of the Ripley character is culturally significant; although mothers in films were respected before Aliens, after Ripley's courageous rescue of Newt from the taloned grasp of the Alien Queen in 1986 filmmakers began taking mothers seriously as warriors. Weaver also holds a Black-Belt in Goju-Ryu karate, so she is not a Mama Bear you'd want to mess with in Real Life either.

Also played Dana Barrett in Ghostbusters (1984) and its sequel, anthropologist Dian Fossey in the film adaptation of Fossey's book Gorillas in the Mist (for which she got another Best Actress nomination; she also got a Best Supporting Actress nomination the same year for Working Girl), Dr Helen Hudson in Copycat, and Grace Augustine in Avatar. She also has a short, but essential, role in The Cabin in the Woods. In 2012 she starred as an academic professionally debunking alleged paranormal activities in Red Lights.

Star of Political Animals, a 2012 USA Network miniseries centering on a Secretary of State who could not more obviously be a redheaded version of Hillary Rodham Clinton.

She's also the daughter of Sylvester Weaver, who was a television pioneer and the creator of Today. She is married to theatre director Jim Simpson, and they have one child, daughter Charlotte.