Conveniently Timed Attack from Behind 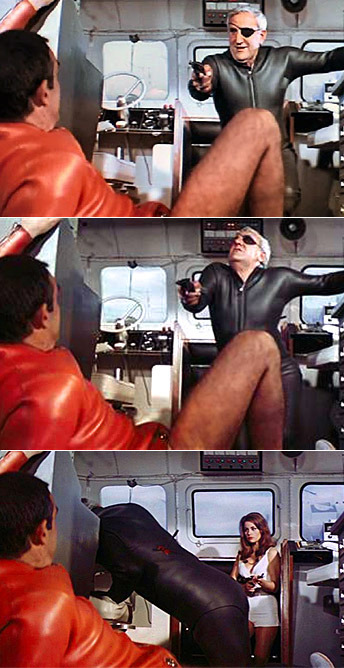 Emilio Largo did not expect to be harpooned in the back.
"Man, your timing really doesn't suck."
— Buffy the Vampire Slayer
Advertisement:

The hero is cornered. His back is to the wall, his gun is out of ammo, he's bleeding from at least one wound, and the bad guy has him dead to rights. Perhaps the hero is hanging from a ledge by his fingertips with a bad-guy standing over him, and the bad guy is about to play a round of "stomp the fingers". Whatever the case, things look bad for the hero.

But just before the mook can end both the hero and the franchise, one of the hero's allies shoots the mook from behind (or runs him through with a sword, or hits him over the head with something heavy) and thus takes out the mook. Regardless of means, someone has just come to the hero's rescue.

Unlike the In the Back trope, this is rarely presented as morally dubious, even though it literally involves shooting someone while their back is turned. The fact that the villain is threatening someone else is justification enough.

Often involves Version A of Bait-and-Switch Gunshot, or in some cases Impaled with Extreme Prejudice. A variation on Big Damn Heroes, sister trope of Thwarted Coup de Grâce. Compare Stab the Scorpion and The Cavalry.

And then a giant crushes one of them and an Action Girl cuts their throats, from behind. Jacuzzi has pals.