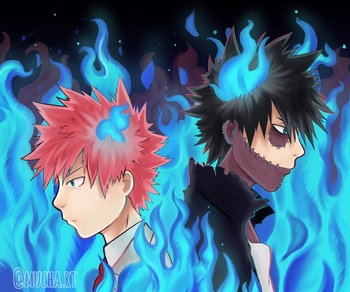 Sixteen-year-old Touya Todoroki didn't understand what was happening when he woke up in the middle of a flaming warehouse. He was wearing the edgiest clothes he'd ever seen and the hero in front of him looked disturbingly like his eleven-year-old brother Shouto. But this guy was his age, not a boy. Touya doesn't get to gawk much longer before he suddenly blacks out, waking up again in handcuffs.

He then learns that he was a murderous member of the League of Villains named Dabi until a few hours ago and that he'd been hit with a de-aging Quirk. After the news sinks in, Touya is given a choice: rot in jail or learn to become a hero with Class 1-A until the Quirk wears off. Left with no better options, he picks the latter.

He always wanted to be in the hero course, but he never imagined it'd be like this.

Now in the same class as his youngest brother and trapped in a future he doesn't entirely understand, Touya lives each day as though he is a ticking time bomb. Only time will tell if this is his second chance to save his future, or if his destiny as a villain is set in stone.

is a My Hero Academia fanfic co-authored by Ohmytheon

. Focusing on Dabi, or rather his former identity as Touya Todoroki, it follows his road towards rediscovering who he is and what led him down the dark path his future self took. It also has a prequel series of one-shots, Embers to Ashes

Karma in Retrograde contains examples of: