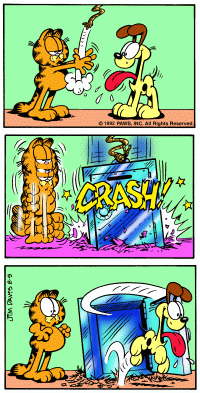 "No matter how many times I see it, I'm still amazed."
Advertisement:

If someone is crushed by a large safe, you only need to open the safe, and he will be inside.

In most cases the open safe reveals a torn and bent "floor" — indicating that the person punched his way into it as though it had been made of paper. Other times both the safe and the new occupant will be completely undamaged, with absolutely no explanation, in-universe or otherwise, as to how they got in there.

Mostly used in comedy or old cartoons, although Super Heroes with invulnerability powers may use it straight.

Compare with By Wall That Is Holey, Impact Silhouette, Piano Drop, and Anvil on Head. Sometimes, this trope may also result in Squashed Flat, Accordion Man, or Forcibly Formed Physique (usually with the character inside becoming a cube).

Has nothing to do with keeping The McCoy out of harm's way.