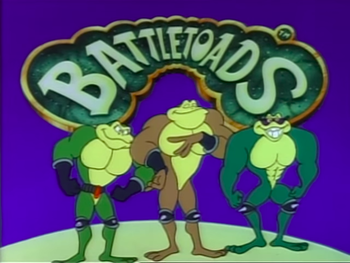 In 1992, Battletoads was a hot game and the Teenage Mutant Ninja Turtles cartoon was still going strong. Given the similarity between the two properties, it stood to reason that a good Animated Adaptation could give the games better Pop-Cultural Osmosis.

Someone must have thought so, because a Battletoads cartoon series, produced by DiC Entertainment, was launched.

The pilot was shown on Thanksgiving 1992. It is a prequel to the game, but does not provide the same backstory as the one published in Nintendo Power. It appeared to be based on a very, very obscure comic adaptation printed in some other gaming magazines at the time, rather than the game itself. In this origin story, Morgan Ziegler, Dave Shar, and George Pie are, rather than computer technicians, three teenage losers from Oxnard, California who are squirted with Super Serum by Professor T. Bird and turned into the Battletoads. Tasked with defending the Princess from the Dark Queen, they receive the "ancient names of honor": Zitz, Rash and Pimple.

It was directed by Kent Butterworth and written by David Wise, who were both major figures in the development of the original Teenage Mutant Ninja Turtles animated series (Butterworth was a senior animator on almost every episode; Wise was the head writer for the majority of its run, and not to be confused in this context with the David Wise who wrote the music for the Battletoads games). A natural expectation would be these guys would make a decent TMNT-alike show.

The pilot bombed spectacularly. The aborted series is a textbook example of a Stillborn Franchise: a niche work being rammed into another medium, adaptation changes alienating the existing fans, critical panning, and a failure to capture a new mainstream audience. No further episodes were broadcast, and it likely destroyed any chance of a good Battletoads series ever being made, and it is now often compared to the Bubsy pilot.

For many years it was nearly forgotten (though it was released on VHS in 1994), buried in the wasteland alongside hundreds of other failed TV pilots, until rediscovered by the Internet. See it in its 30 minutes of glory here

. The Annotated Series has also covered it.

Tropes appearing in the Battletoads cartoon: