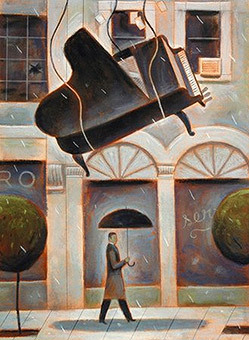 An umbrella won't save you now!
"Just like a Toon to drop a safe on a guy's head"
— Who Framed Roger Rabbit
Advertisement:

Pianos are among the largest, and heaviest musical instruments ever created. Typically constructed of wood, they operate by using hammers actuated by the keys to strike metal strings of various thickness and length to produce various notes. A hallmark of classical music, every great composer from Beethoven to Mozart has made use of them...and, inexplicably, in modern slapstick they end up aloft and plunging towards some poor jackass on the ground.

Basically, a piano that is being lifted via pulley to be moved into or out of someone's high-rise apartment (or otherwise perched at a precariously high spot) will always fall, almost always on someone/something, often with a resounding "BONG". Hilarity usually ensues, thanks to Amusing Injuries. A common gag more often seen in cartoons includes the character rising up from within the wreckage with a mouthful of piano keys like teeth. Bonus points if they start playing by themselves.

Anvil on Head is a similar gag using an anvil.

Not to Be Confused with Colony Drop, Organ Drops, or Odd Organ Up Top. Closely related to Precision Crash.