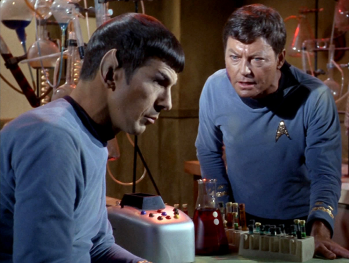 "Dammit man, dare we call ourselves human if we don't act?! What do you mean, 'Thank you'?!"
"It's not enough to survive. One has to be worthy of survival."
— Cmr. William Adama, Battlestar Galactica (2003) ("Resurrection Ship Pt. 2")
Advertisement:

That said, they help keep the drama of a situation personal both for the characters and the viewer, reminding us just why the Littlest Cancer Patient deserves for The Hero to use the Applied Phlebotinum that only works once on him rather than to get them home. To be fair, the Spock can be just as compassionate but is tempered with detachment and enough forethought to realize that the right answer might not be the correct one, (illogical as that sounds). This makes them more willing to sacrifice a few people for many (or sacrifice themselves).

The McCoy still functions as an admirable character, however, due to his absolute devotion to his moral beliefs and his refusal to give in to what others may tell him. To him, there is no such thing as acceptable losses (unless offset by a larger return fitting the loss). And if you start claiming that numbers can be lost or that A Million Is a Statistic, you can expect a thorough chewing out for your coldness. In the McCoy's mind, every life matters and everyone deserves to be saved. While The Spock sees people as numbers in the greater picture, The McCoy sees people with real lives and emotions. Not that he's unwilling to listen to The Spock; the McCoy does know the value of logic despite himself, but he will be clear that even The Spock's plan will be worthless if the wrong person dies.

The McCoy is Honor Before Reason and Beware the Honest Ones personified, and may occasionally be a Strawman Emotional. Will sometimes use Save This Person, Save the World and / or I'm a Doctor, Not a Placeholder.