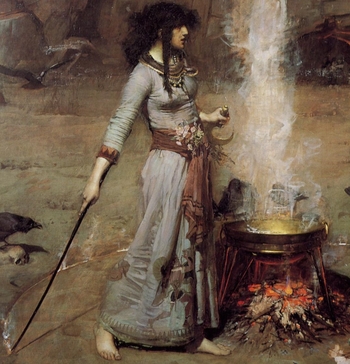 Magicians, sorcerers, mystics, characters with extrasensoric powers, magical or divine/godlike qualities are frequently depicted as eschewing footwear. There are numerous reasons for this, which often overlap.

First, such characters very often have a connection with nature, and draw their magic from it; in this case, footwear may even interfere with their powers.

Second, if a character has some specific abilities (for instance, is immune to cold, able to levitate, or is a member of the undead), being barefoot may actually prove more comfortable and enjoyable than wearing shoes.

Third, shoes and even clothes are symbolically seen as a boundary in numerous religious and esoteric teachings (this is Older Than Dirt: Adam and Eve were both nude and barefoot before the Fall); and since portraying an "enlightened" or "higher-than-human" character as nude may prove problematic, bare feet can be a good compromise.

Finally, this may be a specific instance of Magical Minority Person. This usage is due to the fact that in earlier times lack of footwear was often associated with poverty, misery and mental instability, and nowadays it is a common attribute of nonconformism. A common character of this sort is a New-Age Retro Hippie or a Granola Girl who turns out to have genuine supernatural abilities.