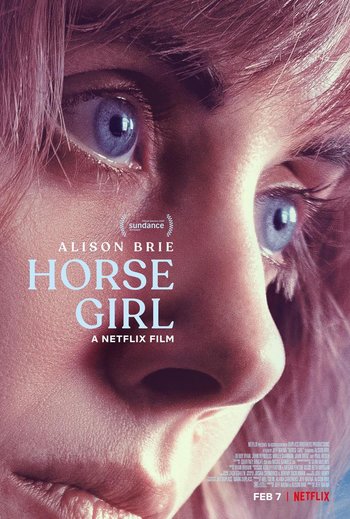 Horse Girl is a 2020 Netflix Original movie written by and starring Alison Brie. Sarah (Brie) is a quiet, mild-mannered craft store employee with a love of horses. She's a little lonely, and struggles to make friends, but she keeps herself busy with arts and crafts, obsessively watching the fantasy TV show Purgatory, visiting her horse Willow (who she no longer rides), and with her co-worker friend Joan and childhood friend Margaret.

After an unexpected birthday party, Sarah meets a new boyfriend, Darren, and things seem to be looking up. However, not all is well. Sarah is haunted by strange dreams that seem real, and periods of missing time, where she finds herself in places without any memory of going there. The film focuses on Sarah's attempts to hold on to reality and discover the truth of what's going on as things become increasingly unhinged.