Film / How It Ends 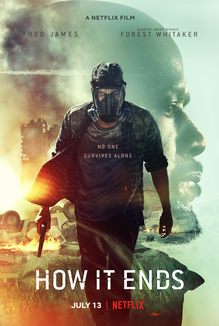 How It Ends is a action/suspense/thriller film released on July 13, 2018 for Netflix's streaming service. Starring Theo James, Forest Whitaker and Kat Graham, the film was announced as early as 2011 but did not begin production until 2015, with filming to begin in 2017.
Advertisement:

It is set before and after an apocalyptic earthquake strikes California, and focuses on Will and Tom as they travel across the country to Seattle to find and rescue Sam, who is Will's girlfriend and Tom's daughter. Throughout the country, the duo find that society has quickly broken down — with access to virtually all of the midwest and beyond being blocked off by the military. The two must brave this no man's land to achieve their goal.