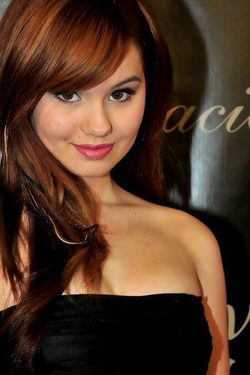 Deborah Ann Ryan (born May 13, 1993) is an American actress and singer, best known for starring as Bailey Pickett in the Disney Channel original series The Suite Life on Deck. The series established Ryan as a Teen Idol and became the most-watched children's show on television since its premiere in October 2008.
Advertisement:

In 2010, she starred in the film 16 Wishes, which was the most-watched cable program on the day of its premiere on the Disney Channel and one of the most-watched movies on television. In addition, 16 Wishes introduced Ryan to new audiences, such as contemporary adult audiences, since the movie received high viewership in the young adult demographic (18-34).

She had her own show on Disney Channel called Jessie, which follows a girl who moves from Texas to New York to become a nanny for a family of four (she also became the youngest female director of a Disney Channel production on said series). In February 2012, she starred in a movie called Radio Rebel. She also performed in the 2013 Macy's Thanksgiving Day Parade. In early 2014 she formed a band called The Never Ending. Their debut EP, One, was released on June 24, 2014.

Compare to Jennette McCurdy, who happens to be one of Ryan's closest friends in Real Life. Not to be confused with Demi Lovato - which is actually something that tends to happen a lot.

This actress's works provide examples of: