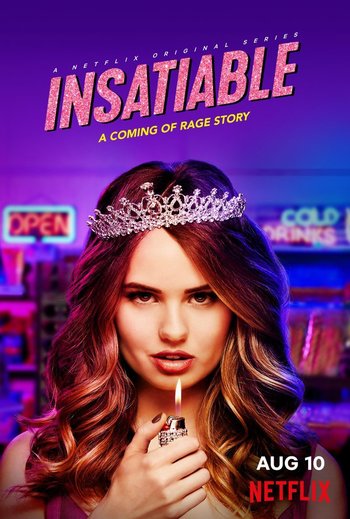 A Coming of Rage Story
Advertisement:

Insatiable is an American Dramedy starring Debby Ryan, Dallas Roberts and Alyssa Milano, which premiered on Netflix in August 2018. The show was renewed for a second season. In February 2020, Netflix announced that the series would not return for a third season.

Ryan plays Patricia "Patty" Bladell, a high school student who had been continuously bullied because of her obesity. One night, she gets into a fight with a homeless man, who breaks her jaw and lands her in a hospital. The forced three-months liquid diet allows her to shed her weight, turning her into a conventionally beautiful young woman.

Roberts plays Robert "Bob" Armstrong Jr, a Camp Straight lawyer. Bob has a passion for pageant coaching, and his life turns for the worse after his protégée's mother falsely accuses him of molesting her daughter. Now only able to work on pro bono cases at his law firm, he is the one called to represent Patty at the trial for her fight with the homeless man. Upon seeing her, he decides to take her under his wing and train her for beauty pageants, while Patty develops a crush on him.

One big problem remains though: Patty might have lost weight, but the toll years of bullying took on her mind and her repressed rage have not disappeared, and being both her pageant coach and her lawyer, Bob just might be in over his head.

The show provides examples of the following tropes