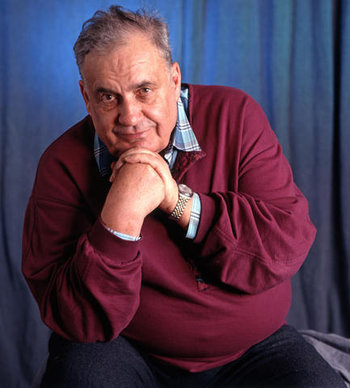 Born in Samara, Ryazanov attended the Soviet State Institute of Cinematography, graduating in 1950. His first works were documentaries. His 1956 film Carnival Night put him on the map and sent him on a fifty-year career directing theatrical features. (His last film, in 2007, was a sequel.) While his contemporaries like Andrei Tarkovsky got famous internationally for directing deadly serious dramas, and others like Sergei Bondarchuk made their names directing grand costume epics, Ryazanov made satires and romantic comedies, and thus remained largely unknown in the West. His films were hugely popular in Russia, however; The Irony of Fate became a New Year's holiday staple in Russia in the same way that It's a Wonderful Life is a Christmas staple in the United States. Working in the comedy genre also allowed Ryazanov to indulge in some sneaky mockery of Soviet life, most famously in The Garage, which is a pointed satire of stagnation and frustration in the late Brezhnev era.