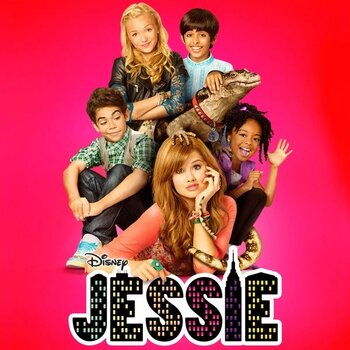 Jessie is a Disney Channel original situation comedy, which debuted on September 30, 2011 and ended on October 16, 2015 after four seasons. The series stars Debby Ryan as the title character Jessie Prescott, an 18-year old woman who moves from Fort Hood, Texas to New York City, eager to forge a life of her own against the wishes of her father.

Due to an unexpected turn of events, Jessie ends up becoming the nanny for the affluent Ross family, who live in a multi-million-dollar penthouse on the Upper West Side. The family is comprised of a film director, his business mogul wife, their four children — 13-year old Emma (Peyton R. List), 12-year old Luke (Cameron Boyce), 10-year old Ravi (Karan Brar) and 7-year old Zuri (Skai Jackson), the latter three being adopted — and their pet Mrs. Kipling. The butler Bertram Winkle (Kevin Chamberlin) and the doorman Tony Ciccolini (Chris Galya) help her from time to time.

Jessie was created by Pamela Eells O'Connell (The Suite Life of Zack & Cody/On Deck, as well as being an executive producer of The Nanny). It's notable among Disney Channel comedies for having its lead character be in her late teens from the start of the series and progress into marriage in later seasons (both firsts for Disney Channel), as such shows typically center around lead characters of middle/junior high or high school age.

The series is extensively linked to the Disney Channel Live-Action Universe through two massive crossover episodes with Austin & Ally (Austin & JESSIE & Ally: All Star New Year airing December 2012) and with Good Luck Charlie (Good Luck Jessie: NYC Christmas airing November 2013). There was also a Christmas-themed crossover episode with Liv and Maddie, albeit partially since it's missing the leads of the other show (Jessie's Aloha Holidays with Parker and Joey), making it the only series to have an unprecedented three live action crossover episodes since the Hannah Montana era (later tying Hannah Montana with the massive "Monstober" crossover event). They even crossed over into Ultimate Spider-Man (2012), teaming up with the Wall Crawler against Morgan le Fey for a Halloween Episode. As it currently stands, it's the most crossed-over show and the show most extensively linked to other shows on Disney Channel.

In 2015, the announcement that the series' fourth season would be its last was made in tandem with the announcement that Emma, Ravi & Zuri would get their own spinoff series Bunk'd, which premiered July 31, 2015. Luke was not a part of the show as his actor Cameron Boyce was given his own show on Disney XD, Gamer's Guide to Pretty Much Everything. Upon the show's conclusion after 98 episodes (101 when counting one-hour episodes as two as per production coding), it stands as the second-longest live-action show in network history behind Wizards of Waverly Place, and third overall behind Phineas and Ferb.

Not to be confused with Jesse, the 1998–2000 NBC sitcom starring Christina Applegate.

The series starts and ends with Jessie's greatest...hits.

The series starts and ends with Jessie's greatest...hits.