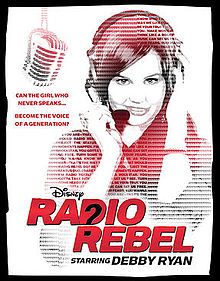 Radio Rebel is a Disney Channel Original Movie based on the book Shrinking Violet by Danielle Joseph. It tells the story of Tara Adams (Debby Ryan), a Shrinking Violet with a major secret: By day she's an ordinary student, but by night she's an anonymous DJ called Radio Rebel. The movie focuses on her using her alter ego to encourage people to embrace what makes them unique, as well as her efforts to forge a relationship with Love Interest Gavin and her torment at the hands of Alpha Bitch Stacy, who finds her goal of becoming Prom Queen quickly threatened by Radio Rebel.