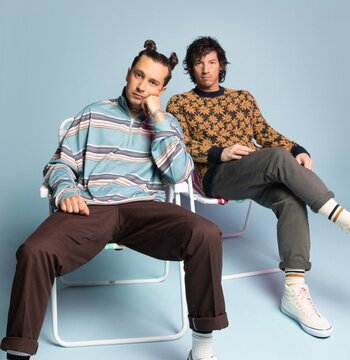 And where are the other nineteen? note Tyler on the left, Josh on the right
Influenced by:Influenced:
Advertisement:

Joseph originally formed the band with childhood friend Nick Thomas on bass and college acquaintance Chris Salih on drums. After the releasing debut album Twenty One Pilots and touring locally, Thomas and Salih left the band in 2011 to respectively focus on school and work, and Salih offered his position to Dun, his co-worker at the time and a fan of the band. The now-duo's second album, Regional At Best, was released soon afterward, and while that project was largely a solo effort by Joseph, he and Dun quickly formed both a fruitful creative partnership and lasting friendship. After finding tremendous success in their home state with their energetic and engaging live shows, the duo was signed to Fueled by Ramen in 2012 and began their rise to global fame with the release of their third album and major-label debut, Vessel, in January 2013.

Two years of touring that included playing large festivals and opening arena shows for Fall Out Boy and labelmates Panic! at the Disco and Paramore organically grew both their fanbase and their reputation as must-see live performers. Their fourth album, Blurryface, debuted at #1 on the Billboard 200 in May 2015 and broke them into mainstream success with multiple Top 40 radio hits, including "Stressed Out", "Ride", and "Heathens" (a song written for the Suicide Squad soundtrack). In February 2018, Blurryface became the first non-compilation album in history to have every track certified as gold or platinum in the U.S., and in 2021 "Stressed Out" was certified Diamond by the RIAA.

The band took a year-long break from social media and public appearances entirely in early summer 2017 to focus on new music. In early 2018, fans began discovering clues establishing the concepts behind their next work, which revolved around a dystopian city called Dema, culminating in the release of their fifth album, Trench, in 2019. After the COVID-19 Pandemic interrupted their touring schedule in 2020, the band released two singles to raise money for charity before promotion began for their sixth album, Scaled and Icy, which was released in May 2021. Subsequent concerts have slightly modified their traditional performance format by incorporating a live touring band, though Joseph and Dun remain the band's only official members.

The band have a unique sound that's hard to describe and has been categorized under genres including Emo Pop, Rap Rock, Indie Rock, Synth-Pop, and Electronicore. Their lyrics commonly deal with heavy topics, such as suicidal depression, anxiety, and unstable sense of self. Their later work also contains a surprisingly deep amount of lore about Dema and its inhabitants that's mostly All There in the Manual.

Should not be confused with the similarly-named (but musically very different) Stone Temple Pilots.