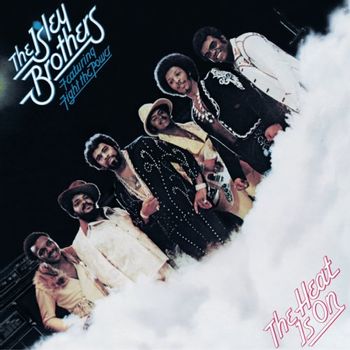 The Isley Brothers are an American R&B, soul, Rock & Roll and funk band. They are one of the few groups to have long-running success on the Billboard charts, placing a charted single in every decade since 1959. As of 2006, they were still charting successful albums performing under a repertoire of Doo-wop, R&B, rock and roll, soul, funk, disco, Psychedelic Rock, urban adult contemporary, Funk rock, and Hip Hop Soul. The group has had a variation of lineups, ranging from a quartet to a trio to a sextet (The 3+3 era being the most popular) to finally a duo.

Occasionally performing in churches throughout their childhood, the three eldest brothers O'Kelly, Rudy, Ron, were taught how to perform in front of crowds by their parents, who were also musicians, along with their younger siblings. A few years after the death of younger brother Vernon from a road accident, O'Kelly, Rudy and Ron were convinced by their parents to form a new singing group together. After forming the group in 1957, the brothers immediately moved to New York and began recording in the doo-wop music genre. In 1959, RCA Records signed the group after catching them in concert where they had opened for R&B star Jackie Wilson. Their second release from the label, Shout, became the group's first charted single, reaching No. 47 on the Billboard Hot 100, though it failed to enter the R&B chart. The single, written by the three brothers, was a modest single when the group released it, but the song gained a mainstream following after cover versions by singers such as Lulu and Joey Dee and the Starlighters helped the song eventually sell over a million copies. Motivated by its success, RCA later re-released the group's original version in 1961 but the song only peaked at No. 92. A follow-up success to Shout! never came; the group was released from their contract.

Signing with Wand Records in 1962, the group scored their first top-40 single, Twist & Shout, which was originally recorded in a calypso production by the Top Notes. The Isleys' version, which had a more rock flavor, influenced many groups, including The Beatles, who would record the single the following year and finding huge success before the group moved on to record their own compositions. After several more releases, the group left Wand Records in 1964 and formed T-Neck Records after moving to New Jersey. Finding only local success with the single Testify, recorded with a young Jimi Hendrix on guitar, the group temporarily folded T-Neck and signed with Motown's Tamla imprint in 1965. The following year's This Old Heart of Mine (Is Weak for You) gave the group their biggest success up to that point on the American Billboard chart, reaching No. 12 on the Hot 100 and No. 6 in R&B. Much like their earlier tenures in other labels, the Isleys couldn't come up with a follow-up and after complaining of being given "leftover tracks" from the label's staff songwriters such as Smokey Robinson and Holland-Dozier-Holland, they asked to be let go from their contract in 1968.

Upon separating from Motown, the group discovered that they had a huge following in England where three of their Motown singles had reached the top 40 (among them This Old Heart, Put Yourself in My Place and Behind a Painted Smile). Touring in the UK that year, they returned to the U.S. with a new image and sound. Signing a new distribution deal with Buddah Records, the group recorded the gritty soul single, It's Your Thing, a noted departure from their earlier recordings and showcasing a more independent sound in addition to featuring younger brother Ernie on lead guitar. It was released under the group's revived T-Neck label and eventually rose to No. 2 on the Billboard Hot 100, becoming their biggest charted success, selling over a million copies and winning the group a Grammy Award for Best R&B Vocal Performance by a Duo or Group. The success of It's Your Thing reportedly irked Motown CEO Berry Gordy, who had agreed to let the band leave Motown in 1968; Gordy began making accusations that It's Your Thing was recorded while they were still in Motown, which the group denied. After several years, Gordy settled with the group out of court. The group released a succession of seven albums for Buddah including The Brothers: Isley, Givin' It Back and Brother, Brother, Brother. After the release of a live album, the group left Buddah in 1973 after being offered a long-term distribution deal with Epic Records by Clive Davis, then president of CBS Records.

After signing with Epic, the group updated their lineup, now including Ernie, brother Marvin and brother-in-law Chris Jasper. The addition of songwriters and musicians Chris, Marvin and Ernie made the group a self-contained act. The trio had worked initially in the background on some of the group's Buddah recordings. Their 1973 album, aptly titled 3 + 3, featured the crossover hit, That Lady, and featured guitarist Ernie Isley in a memorable solo near the end of the song. By the end of the year 3 + 3 became their first album to be certified gold. In 1975 the group hit No. 1 in the album chart with The Heat Is On, featuring Fight the Power and For the Love of You. Throughout the 1970s and 1980s the Isleys issued other successful recordings such as Harvest for the World, Showdown and Between the Sheets.

In 1984, the lineup splintered, with Chris Jasper, Ernie and Marvin Isley forming the Isley-Jasper-Isley group. The 3 + 3 period is still considered by some as the most notable Isley Brothers era sandwiched between the group's earlier classic rock/soul period and the group's later tenure into smooth urban contemporary music. While the group members shared lyrical composition rights, it is noted that most of the group's singles were constructed by Ernie, Marvin and Chris, while allowing O'Kelly, Rudy and Ron to share credit, easily splitting royalties with the members. By 1985 Ronald, O'Kelly and Rudolph found themselves in trouble with the IRS for not paying back taxes and evading payments. To settle the three agreed to sell their label, thereby folding the company, though its imprint's logo would still be on Isley Brothers records. All of the group's T-Neck recordings are in the control of Sony Music. Afterwards the group, which reverted back to the original lineup of Kelly, Rudy and Ron, left Epic for Warner (Bros.) Records and continued to record, now relying on outside writers, musicians and producers.

After the younger brothers splintered from the group in 1984 the remaining trio continued recording until O'Kelly's death from a cancer-related heart attack in 1986. Rudy left the group for a career in the ministry in 1989. In 1991 Ron reformed the group with Ernie and Marvin returning to the lineup. Since 1997 after diabetes forced Marvin into retirement, the lineup has been Ron and Ernie (now on hiatus due to Ron's current prison sentence after a tax evasion conviction in 2006). Ron Isley, has also suffered hard times, recently convicted of tax evasion charges in 2006 after he was accused of not paying back taxes between 1997 and 2002, giving band mates cash rather than taking the money to cash a check, and using money from his late brother O'Kelly's estate to continue his "expensive lifestyle". After quietly divorcing Winbush in 2002, Ron was married for a third time to his backup singer Kandy Johnson, formerly of the group JS, and became a father again in 2006. He also has a daughter from a previous marriage. In 2004 the singer suffered a mild stroke during a touring schedule in London. During his court case it was revealed Isley had kidney cancer and other failing organs. Isley's lawyers have tried pleading with the judge to give leniency to the singer, who was sentenced to serve 37 months (at least three years) in prison, but had been denied. Isley was released early from federal prison in October 2009 and was transferred to a halfway house in his hometown of St. Louis, Missouri, where he would serve out the remainder of his sentence, which ends in April 2010.

Much like The JB's, Parliament-Funkadelic, DeBarge and Zapp, the Isleys are among one of the most-sampled groups in hip-hop history with their recordings sampled by the likes of Tupac Shakur, The Notorious B.I.G., Outkast, UGK, J Dilla, Bone Thugs-n-Harmony, Ice Cube and Snoop Dogg, among others.