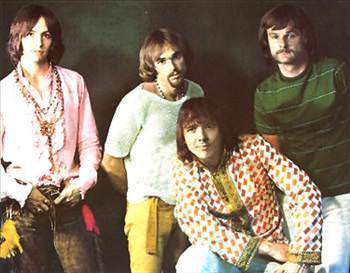 Reverend Lovejoy: And now, please rise for our opening hymn, uh... "In the Garden of Eden," by I. Ron Butterfly.
Homer Simpson: Hey, Marge, remember when we used to make out to this hymn?
— The Simpsons "Bart Sells His Soul"
Advertisement:

Iron Butterfly is a Psychedelic Rock band and a major influence on Heavy Metal. They are well known for "In-A-Gadda-Da-Vida", the title track of their second album. The 17 minute long piece was epic, menacing and altogether awesome, and has since become a staple of numerous pop culture references thereafter. Oh yeah, and they did some other songs, too.