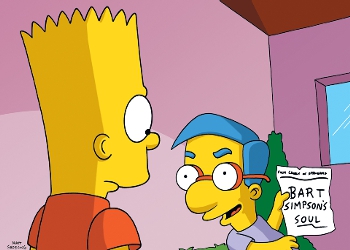 "Bart Sells His Soul" is the fourth episode of the seventh season of The Simpsons. To prove that souls do not exist in his opinion, Bart sells his to Milhouse. But several events make him regret this bargain. Meanwhile, Moe tries to turn his bar into a family restaurant.

Bart pulls a prank at church, switching the intended church hymns for Iron Butterfly's "In-A-Gadda-Da-Vida" (or as it's presented: "In the Garden of Eden" by "I. Ron Butterfly"). Reverend Lovejoy soon catches wind of the ruse, and after the 17-minute song ends with the organist collapsing, he angrily confronts the children to demand who was behind it. Milhouse snitches on Bart out of fear of God's wrath and both are forced to clean the organ pipes as punishment (Bart for the prank and Milhouse for being a tattletale).

Milhouse tells a disgusted Bart that he snitched on him because he wanted to save his soul. Bart however scoffs at the idea that man has a soul, and to prove his point that the soul isn't real, he writes "Bart's Soul" on church stationery and sells it to Milhouse for $5.

Meanwhile, Moe bemoans that no one wants to go into "dank pits" anymore after the Hibberts refuse to have their Sunday brunch at the tavern. So he decides to repurpose the bar into a family restaurant, buying Army surpluses such as a fryer that can fry an entire buffalo in two minutes.

With the money from his soul, Bart buys a sponge dinosaur, but it fails to grow. After finding out, Lisa is dismayed at Bart's action. telling him the soul is the most important possession a person can have. Bart then has a series of mishaps, such as the pets failing to recognize him, the Kwik-E-Mart's doors not opening for him, being also unable to blow into the window door of a freezer and dreaming about not being able to row his way to a castle while Milhouse doesn't have to row at all for he has two souls. After he becomes unable to laugh at Itchy & Scratchy, he and Lisa realize it's serious, so Bart tries to retrieve his soul from Milhouse, who now charges him fifty smackers for it.

The Simpsons have their Sunday dinner at "Uncle Moe's Family Feedbag", who offers a bowlful of fries for birthdays as well as a "smiles policy" (if Moe doesn't smile it's free) and an overall campy atmosphere. After Lisa deliberately leaves him out of her prayer, Bart storms out to look for his soul. But "Uncle Moe" has his share of problems: Aside from running a large-scale operation for hours on end, he has to carry the birthday fries on his head and customers take advantage of him, not to mention that his personality isn't suited to running a family-friendly establishment, finally snapping at a little girl who asks him for a warmer drink. This leads to the outraged clientele walking out and Moe reverting to his old tavern before the night ends.

Bart rushes to the Van Houten residence only to find out the house is being fumigated. So, he has to head downtown to Milhouse's grandmother's apartment, encountering an evil streetcleaner and Wiggum dealing with a doom-saying vagrant on the way (Bart tries to get Ralph's soul in the process). Unfortunately, when he finds Milhouse, he tells Bart he's already traded the soul at the Android's Dungeon for some ALF pogs. The following morning, Bart goes to the shop only to be told by the Comic Book Guy that his soul had been bought as soon as it came, keeping the customer's name confidential. Fearing his soul has been acquired by bad people, Bart prays to God to give him back his soul... and the paper appears all of a sudden, as it turns out Lisa was the one who bought his soul. Bart promptly scarfs down the paper while Lisa tries to explain him the importance of the human soul. The episode ends with Bart dreaming of him and his soul rowing to the castle.