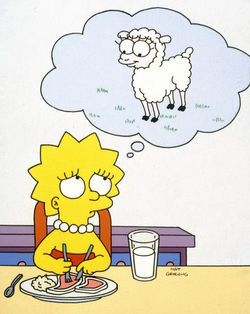 Following a day trip to the petting zoo, Lisa begins to realize that the meat she called food was once an animal that was cute and cuddly, so she decides to become a vegetarian, which gets her ridiculed by her friends and family. Meanwhile, Homer sets up his own barbecue after not being invited to one at the Flanderses' house (which was strictly a family reunion).