Vegetarian for a Day 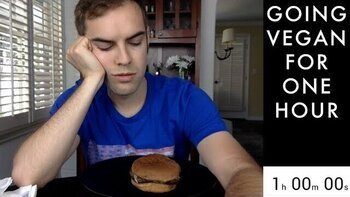 A plot where a character is inspired to go vegetarian, but finds themself back to their original omnivorous diet again by the end of the episode.

There are several common reasons that lead to a character deciding to do so. The characters might have learned how meat is produced and became so disgusted that they decided to abstain from meat for good. It might have been done for health reasons (since vegetarians are typically healthier than non-vegetarians), in which case this might overlap with a Diet Episode.

If a character is forced into this by another they will often feel constantly tempted, perhaps with literal Meat-O-Vision.