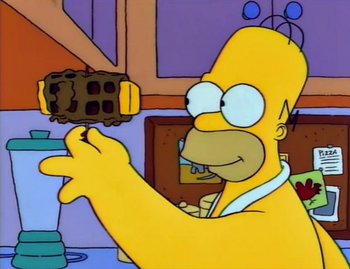 "Mmm...fattening."note Just in case you didn't know, it's a waffle made with a mix of waffle batter, melted caramels, and liquid smoke all wrapped around a stick of butter.
Dr. Nick: [points to a chart] You'll want to focus on the neglected food groups such as the whipped group, the congealed group, and the chocotastic!
Homer: What can I do to speed the whole thing up, Doctor?
Nick: Well... be creative. Instead of making sandwiches with bread, use Pop-Tarts. Instead of chewing gum, chew bacon, heh...
— The Simpsons, "King-Size Homer"
Advertisement:

We all know what is generally considered unhealthy food: hamburgers, chips, fries, donuts, pizza, bacon, pancakes, and so on. All the fats, oils, and sweets that reside in the top section of the food pyramid.

Combine enough of those things into one food product, though, and you end up with something that's almost lethal to eat. Some examples include ice cream made out of butter instead of milk or a cheeseburger with fried chicken breasts for buns.

If you want to make this trope even unhealthier, sprinkle it with some sugary examples and grill it over a Flame War.