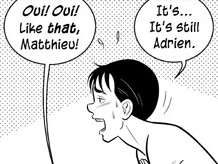 In an emotional moment, a character gets someone's name wrong. Often this reveals that current drama has triggered a memory of a similar situation in the past. If the name isn't familiar, cue a Flash Back to who they were; if it is, there's probably some backstory between the characters we weren't aware of before.

If the wrong name pops up during sex (or at the altar), the speaker may not live much longer.

If the speaker is senile, or generally a Cloud Cuckoolander, it's more likely to be Accidental Misnaming or Thoroughly Mistaken Identity, but it may overlap with this. Otherwise the two generally don't overlap, as this is a Freudian Slip rather than a genuine lapse in memory.

A You Remind Me of X situation may prompt this.

Only counts if it makes it to a final cut; somebody calling a character by the actor's name in the Blooper Reel isn't one of these.