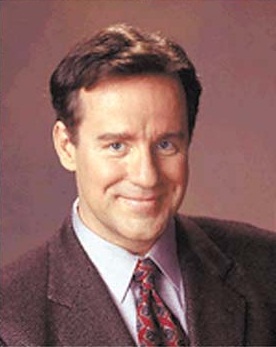 Philip Edward Hartman (September 24, 1948 – May 28, 1998) was a Canadian-born comedian and actor famous for starring on Saturday Night Live from 1986 to 1994,note considered to be the show's second Golden Age for his guest appearances on The Simpsons as incompetent attorney Lionel Hutz (who has a law office at the local mall called "I Can't Believe It's a Law Firm") and washed-up B-movie actor Troy McClure, and for starring as Bill McNeal on the sitcom NewsRadio. He was the most prolific guest star on The Simpsons ever.

Hartman has been consistently praised as one of SNL's best performers. His memorable celebrity impressions included Frank Sinatra, Charlton Heston, Ronald Reagan, Ed McMahon, Kirk Douglas, Jim Bakker, Jimmy Swaggart, Barbara Bush, and Bill Clinton (years before Darrell Hammond would also be famous for the impression).note In fact, a lot of Darrell Hammond's memorable impressions were made famous by Phil Hartman, like Donald Trump, Dick Cheney, and Johnny Cash. His original characters included Eugene the Anal-Retentive Chef (who also appeared as an anal-retentive carpenter and an anal-retentive sportsman) and The Unfrozen Caveman Lawyer. His ability to adapt to any performance and keep the cast working together earned him the nickname "Glue" from co-star Adam Sandler.

Hartman had a strained marital life. Having married twice and divorced both times just a few years later, he eventually wed Brynn Omdahl in 1987. However, his success became intimidating to Brynn, who sought increasing solace in drugs and entered rehab numerous times as Phil continuously tried to help her break into acting. On May 27, 1998, their marriage reached a breaking point: Phil and Brynn entered a heated argument over her drug addiction, with Phil threatening to leave her (something neither of them had previously discussed or even considered) if she couldn't remain sober before eventually retiring to bed. That night, Brynn took a combination of cocaine and alcohol, entered her husband's bedroom, and shot him to death just before 3 A.M. on the morning of May 28. Three hours later, she killed herself.

The outpouring of sympathy was immense. Simpsons creator Matt Groening had Hartman's characters Hutz and McClure retired from the show (though those two characters did appear in some of the comic book stories), and named Futurama protagonist Phillip J. Fry in honor of Hartman, while Billy West took over as the voice of Zapp Brannigan (who was supposed to be voiced by Hartman). NewsRadio pressed on one more season (having his character Killed Offscreen by a coronary), this time with his friend Jon Lovitz, before being cancelled, because as his castmates put it, "Phil would've wanted us to."