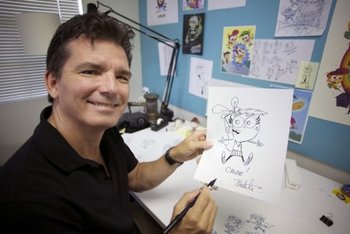 Just your average cartoonist, that no one understands.
Advertisement:

Elmer Earl "Butch" Hartman IV (born January 10, 1965) is an American animator, writer and actor, best known for the many, many shows he has created for Nickelodeon from 1998 to 2018.

Like many great animators from The Renaissance Age of Animation, Hartman is a graduate of the California Institute of The Arts. He managed to snag his first animation job between his first and second years as an inbetweener on An American Tail.

After graduation, he was hired as a storyboard artist on My Little Pony... then fired six weeks later. He spent a few years at Ruby-Spears before moving on to Hanna-Barbera, a studio he was a huge fan of. Starting as a model designer, Hartman quickly rose through the ranks to being a director on four of Cartoon Network's first five original shows, eventually becoming one of the key staff writers on Johnny Bravo alongside a young Seth MacFarlane (Dr. Elmer Hartman on Family Guy was named after him). He also worked on multiple shorts for the What A Cartoon! Show, one of which, Phish and Chip, was one of the only shorts not spun off into it's own show to receive a sequel short (Hartman also voiced Chip).

Hartman moved on to Nickelodeon as soon as his contract with HB expired to work on a slightly similar show, Oh Yeah! Cartoons. There, he created several shorts that would eventually become The Fairly Oddparents, one of the station's longest running shows (the Oh Yeah! shorts were retroactively named "Season Zero"). In fact, something else Hartman and MacFarlane have in common: their animated shows are the only ones to ever get Uncanceled twice. Hartman has since produced three more shows for the station, Danny Phantom, T.U.F.F. Puppy and Bunsen is a Beast, making him second to Klasky-Csupo as Nick's most prolific creator. In 2018, he parted ways with the company after twenty years of employment, assuring fans that he was still hard at work on new shows while making videos for his YouTube channel. He would also make a return to Cartoon Network for the action comedy Dynamice!... or at least attempted to. CN changed a lot since he last worked there and the pilot wasn't picked up, leaving him in a bit of limbo for the time being. At the current he makes Youtube vids talking about his career and topics of animation in general (read more on that below).

Hartman's cartoons are instantly recognizable: visually, his character designs tend to be angular and have thick outlines. Most notable is that his are the few characters in TV animation to have colored eyes rather than black circles. Writing wise, expect the characters to be so self-aware that you might be asking them if they are holding up the fourth wall, as well as including a healthy dose of pop culture references, both modern and not so modern.

Unlike many of his contemporaries, Hartman is admittedly one of the few who isn't at all interested in creating cartoons for adults, and has often expressed his disappointment in other animators for implying that there is anything wrong with cartoons that are exclusively for children. He even has a pet project Noog Network, an app which hosted exclusively "kid safe" shows. Regardless of one's agreement with him, it is clear that the career path he has chosen suits him.

Hartman has also had a fairly steady career as an actor, both in voices and live-action. In addition to some one-shot characters on his friend Seth's show, he was a regular on Days of Our Lives in the late '80s, and starred in the short-lived Generations as Sean Masters, as well as a smattering of small roles in late 80s/early 90s comedy films and shows. He was also part of the video reference cast for Disney's Pocahontas.

Hartman has also been a regular web presence in the second half of The New '10s, with semi-regular videos on YouTube giving career advice, doing live drawing sessions and interviewing fellow talents he's worked with. He is also producing a Web Animation series spin-off of the children's YouTube channel HobbyKidsTV, HobbyKids Adventures

Since 2005, Butch and his wife Julieann have been running a Christian non-profit organization called Hartman House

, which funds housing for the most poverty-stricken parts of the United States and provides homeless families with dinners during Thanksgiving. Butch has attended many of these events, doing personal drawings and autographs for charity.

And last but not least, he's the Trope Namer for Hartman Hips (although this is a slight misnomer: it's actually Steven Silver who designed many of the characters who are classified as such).

No relation to Phil Hartman, by the way.