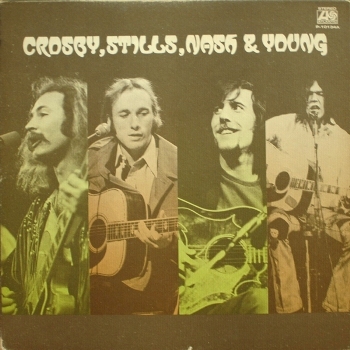 CSNY during their heyday.
Advertisement:

Crosby, Stills, Nash & Young (or Crosby, Stills & Nash) are a Supergroup consisting of David Crosby, Stephen Stills and Graham Nash originally, until they were joined by a fourth member, Neil Young, and eventually became known under this name instead.

The band came about after David Crosby had left The Byrds due to internal conflict. Around the same time Stephen Stills' and Neil Young's old band Buffalo Springfield had split, they went their separate ways and they were on their own feet too. Graham Nash was a member of The Hollies in those days, but had felt long frustrated about just being second violin to the group as a whole. When the three musicians came together in 1968 they realized they could start a new band by themselves and thus Crosby, Stills & Nash was born. They decided to use their own names, because it would better showcase their individuality; they also hoped it would prevent the tensions they all had experienced by operating as an anonymous musician under a collective band pseudonym.

From the start the band had immediate success. Their 1969 debut album, Crosby, Stills & Nash, spawned the Top 40 singles "Marrakesh Express" and "Suite: Judy Blue Eyes" and got great reviews. In the summer of 1969, Stills brought his former Buffalo Springfield bandmate Neil Young aboard. Restructured, the band now became Crosby, Stills, Nash & Young. Writing for the Drake-Chenault produced History of Rock and Roll

radio series in 1969, LA Times rock critic Pete Johnson described them as one of several groups of the period to have very "well-matched voices" and they were sometimes called "the American Beatles".

They played during the legendary Woodstock Music & Art Fair in 1969. Their recording of the Joni Mitchell song "Woodstock", written after the festival, became the unofficial anthem of the concert. They also played at the "free concert" at the Altamont Speedway in December 1969, but due to the violence and murder associated with the festival their performance was cut at their own request from the documentary Gimme Shelter (1970). 1970 also saw the release of Déjà Vu (1970), which generated the hits "Woodstock", "Teach Your Children" and "Our House", and the occurrence of the Kent State Shootings

on May 4, when the Ohio National Guard gunned down students protesting Nixon's bombing of Cambodia

.note Two of the "four dead in Ohio" weren't even protesters but were just walking through the parking lot; one was in ROTC! The tragedy inspired Young's stark song ""Ohio

". The boys feared the song would be banned, but radio stations throughout the country placed "Ohio" into heavy rotation before its actual release.

Each individual member released a solo album: Neil Young's After the Gold Rush from 1970 (his third album), Stephen Stills' Stephen Stills from 1970, David Crosby If I Could Only Remember My Name from 1971 and Graham Nash's Songs For Beginners from 1971. Crosby And Nash even started a duo together, with their first album being Graham Nash/David Crosby from 1972. Although they performed on each other's solo albums they started paying more attention to their own work than working together as a group. When they did come together, Creative Differences and drug abuse took their toll; but since none of their second solo albums had done very well, they agreed to manager Elliot Roberts' suggestion of a 1974 stadium tour. You can hear a montage of the best performances from these "Doom Tour" shows in the box set CSNY 1974, but this wasn't released until 2014.

The next collective studio album didn't come out until 1977, and by that point Young had already left the group, causing them to name the album CSN, short for the first names of the remaining band members. "Just a Song Before I Go" became a hit, with "Dark Star" receiving some attention and "Cathedral" popular on college radio.

During the 1980s the band kept performing. Daylight Again from 1982 had the hit singles "Wasted on the Way" and "Southern Cross," ("Turn Your Back on Love" and the title track were well received on college radio). One of the performances from the promotional concert tour was broadcast on PBS and has since been released on DVD. 1983's Allies had the theme to WarGames and some strong Crosby live performances, but in '82 Crosby had been convicted for drug and weapon charges and spent 8 months in jail. He decided to go into rehab after this and his 1985 arrest for DWI and concealed weapons.

Young rejoined the band briefly for American Dream in 1988. By that point the band effectively became more popular as a concert experience and their social activism than for their newer albums. In 1997 they were inducted in the Rock & Roll Hall of Fame, though Neil Young was excluded.

In late 1999 the four released Looking Forward, after Neil became interested in some new songs CSN had recorded sans record deal while he was working with Stephen Stills on a Buffalo Springfield box set. While well received at the time, the album didn't seem to have any lasting hits and only Crosby's "Dream For Him" still gets played at shows. The tour they did to promote it was called, of course, CSNY2K.