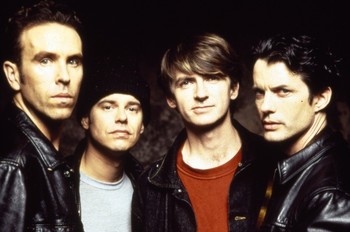 Hey now, hey now,
Don't dream it's over,
Hey now, hey now,
When the world comes in,
They come, they come,
To build a wall between us,
We know they won't win.
"Don't Dream It's Over"
Advertisement:

Crowded House is an Australian/New Zealand Alternative Rock band formed in 1985. Its original members were lead singer and guitarist Neil Finn, drummer Paul Hester (both previously of Split Enz), and bassist Nick Seymour. Crowded House got their name from their uncomfortable living conditions in L.A. during the recording of their first album.

The band gained early success in the U.S. with their brand of clever, exuberant Power Pop that avoided the overblown production prevalent in the The '80s. Their first album spawned the hits, "Something So Strong" and "Don't Dream It's Over" and proved Neil's knack for catchy songwriting. They soon became known for their anarchic live shows and dorky personas (in part carried over from Neil's time in Split Enz). Their second album, Temple of Low Men, however lost them support due to its Darker and Edgier themes - while still popular in Australia, the album barely cracked the American Top 40.

On their third album, Woodface, Neil's brother Tim Finn joined the band. It brought the band invigorated commercial success (while not charting highly in the States, it was the first of their albums that cracked the Top 10 in the UK) which allowed them to indulge in the artier Together Alone (Tim Finn however left the band before the recording of the album, to be replaced by guitarist Mark Hart), spawning seven singles.

Paul Hester departed in 1994, replaced by drummer Peter Jones, but when Neil Finn decided to disband the group in 1996 he returned to perform for the band's farewell show at the Sydney Opera House. A greatest-hits record, Recurring Dream, that included three brand-new songs, was the band's swan song. A collection of rarities, Afterglow, was later released in 1999.

Post-breakup, Neil Finn launched a successful but low-key solo career as well as releasing a second album of songs with his brother Tim. Nick Seymour moved to Ireland, and notably produced the debut album of Bell X1. Mark toured with several other artists, including Ringo Starr.

Paul Hester hosted a talk-show on Australian television, and had a recurring role on The Wiggles as Paul the Cook, however, tragically, following the break-up of his relationship with the mother of his two daughters, he committed suicide in 2005.

The band reformed in 2007, with Finn, Seymour & Hart, along with Matt Sherrod on drums, replacing the late Hester. They have since released two well-received albums, 2007's Time On Earth and 2010's Intriguer. Before re-forming, the original line-up's final 1996 show at the Sydney Opera House was released as Farewell To The World in celebration of that show's 10th anniversary, in 2006.

Since the release of Intriguer, Neil Finn in 2012 recorded "Song of the Lonely Mountain" for the end credits for the first part of Peter Jackson's film adaptation of The Hobbit: An Unexpected Journey. He also formed an new band, Pajama Club, with his wife Sharron, and released his third solo album, Dizzy Heights, in 2014. One of the songs recorded for Recurring Dream, "Help Is Coming", was released as a charity single for Syrian refugees in September, 2015.

On September 5th, 2016, in commemoration of the band's 30th anniversary, the band was inducted into the Aria (Australia's equivalent to the Grammys) Hall Of Fame. Then, in November 2016, the band's studio albums + Afterglow were remastered and re-released in deluxe editions, each containing a new disc of rarities, B-sides, and demos curated by Neil Finn. A planned reunion concert of the band at the Sydney Opera House scheduled for 24 November, 2016 eventually was expanded by three additional days of shows due to overwhelming demand.

After a period of hiatus after the 2016 Farewell to the World aniversary concerts, Crowded House announced a reunion concert at the 2020 Byron Blue Festival. However, Mark Hart announced that he would not be a part of this reunion and Neil Finn announced that the new lineup of Crowded House would consist of himself, Nick Seymour, long-term producer Mitchell Froom and his sons Liam and Elroy. Neil Finn added that this new lineup of Crowded House were making a new studio album, their first since Intriguer - later revealed to be titled Dreamers Are Waiting and released on June 4, 2021. In October 2020, the band released a new single after a decade, "Whatever You Want", followed by second single "To The Island" in February 2021.