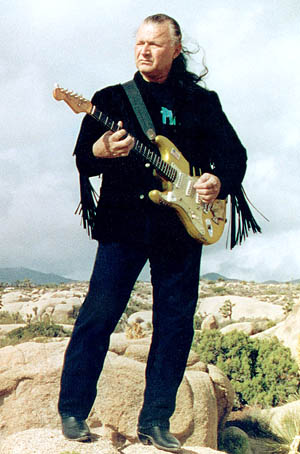 That's his backyard, by the way.
He was born Richard Anthony Monsour on May 4, 1937, but the rest of the world knows him as Dick Dale, the King Of The Surf Guitar. He was largely credited for kickstarting the Surf Rock movement singlehandedly, and in fact, "Let's Go Trippin'," released in 1961, is perhaps the first surf instrumental in rock history. Dick was one of the most powerful guitar players of his time, responsible for various innovations in rock, such as introducing the use of reverb to create a "wet" sound.
Advertisement:

He's also known for his staccato, rapid-fire style of playing (referred to by guitarists as "tremolo picking"), which lead him to break the heaviest guitar strings on the market at the time. In fact, his playing was so intense that Fender made custom amplifiers for him, including the first 100 watt amp. For these and other reasons, Dick wound up being a huge influence on Jimi Hendrix. Interestingly, Dick was left-handed, and managed to pave all this new ground while playing his guitar upside-down without restringing it, which even the fellow leftie Hendrix couldn't boast.

For a number of reasons, Dale's music ended up being influential enough on Heavy Metal that some commentators have, in all seriousness, referred to him as the Father of Heavy Metal. Part of this was his connection to the development of the amplifier and electric guitar; part of it was due to his showmanship and the intensity (and loudness) of his performances; the technique of tremolo picking, which he popularised, also wound up being ubiquitous in metal music, particularly Thrash Metal and Black Metal. Dale also played a major role in popularising the usage of Middle Eastern scales in rock music.note He credited an uncle of his who was an oud player for getting him interested in music. According to legend, his choice to cover 'Misirlou' came from a bet that he could play a song on one string, which stirred a memory of his uncle playing the song in such a manner.

His heyday was in the 1960s, prior to The British Invasion. However, Dick also managed a resurgence in popularity when one of his signature tunes, the cover of "Misirlou", was featured on the soundtrack for Pulp Fiction. He's also responsible for the soundtrack to Rocket Jockey.

Dick Dale was also an environmental activist, stemming from when he almost lost a leg due to an injury from swimming, made worse by a pollution infection.

Dale's home was Twentynine Palms, California, and he performed well into his seventies, notably with his son, Jimmy Dale, on the drums. Sadly, Dick Dale left this Earth on the night of March 16th, 2019, to ride that big wave in the sky.