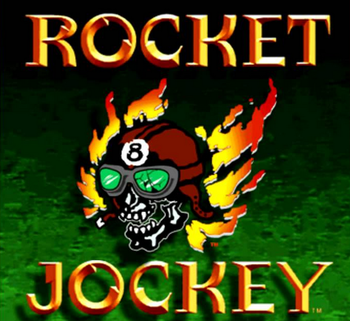 Now-defunct developer Rocket Science Games had a very clear idea as to what constitutes fun: motorcycles + rockets = awesome. Out of this simple combination came Rocket Jockey, a game in which you ride backyard-built, incredibly fast rocket-cycle contraptions (called "sleds" in-game) that are far more likely to throw you off the seat and into low orbit than they are to get you to the finish line in time.
Advertisement:

Of course, merely strapping a seat to a rocket wouldn't make for very controllable vehicles, so the bikes are given tiny control surfaces that can slowly change their direction, and thick cables with grappling hooks that you can anchor to pylons and obstacles present in all maps to turn a lot faster - if you can find such an obstacle nearby, of course; otherwise, a close encounter between your face and the ground (or a wall) is probably mere seconds away.

Said cables also have a more nefarious purpose: since the other riders are just as precariously perched on their rocket contraptions as you are on yours, it's just a matter of good aiming to snatch them off their seats with a well-placed cable. You can then do various acts of nastiness to them, including dragging them around, smashing them into things, and tying them to other things like other people, bombs, flying bikes, and rotating pylons that reel them in and guarantee a kill. Also, riders that fall off leave behind them riderless bikes which you can steal and add to your own collection.

The game is divided in three modes: Rocket Race, Rocket Ball and Rocket War. Race is what you'd expect: complete a set course (indicated by glowing pairs of pylons) in a predetermined amount of time. Ball is a weird type of football/soccer where you need to snag balls or hovering pucks with your cables and send them into goals; accompanying them with other riders is optional, but highly recommended. War is by far the most satisfying and fun mode, and really what the game is all about - it's basically a free-for-all deathmatch in which the objective is to reach a set number of points (which you get by being violent to the other jockeys) before the timer ends. Typically devolves in an exercise of Video Game Cruelty Potential, as you attempt to drain the enemy racers' health meters as slowly as possible, and direct attacks aren't the best way to accomplish this. It's much better to prolong their pain, since you don't get points for torturing a "dead" jockey.

The result is an incredibly fun and addicting game, which makes you wonder how come nobody thought of it before and hasn't since.

Too bad the game hasn't aged well - it never was hardware-accelerated, so the graphics look really old and simplistic. The controls also have an annoying tendency to lag if you install the 1.1 patch that adds LAN multiplayer support. The rest, however, remains as fun today as it was in its time.

Has spawned a few attempts at remakes, but for a long time nothing came close to being playable. Fortunately, this seems to no longer be the case

, thanks to an independent developer.