Pass Through the Rings 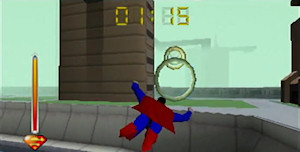 Then there's no time to waste! We've got to get through these hula hoops, and fast!

An extremely common type of mission that tasks the player with flying, running, or driving through a series of large, illuminated rings, usually within a limited amount of time.
Advertisement:

One common variation sees you following behind something collecting something it drops in order for you to continue, like air bubbles in an underwater level or health-ups in a lava level.

These kinds of missions are common for two reasons: first, it sets a clear, specific objective that can be a challenging and fun way to master the controls across a number of popular game genres. Second, it's generally very easy to make them; place a bunch of ordered rings, and add a time limit and/or swarm of enemies.

Rings are also not unheard of in racing segments.