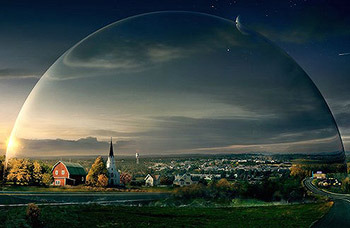 D'OOOOOOOOOOOOOOOHME!!!!
"Some people say, 'I don't know that I want to live in a dome.' Your brain's in a dome. You've been living in a dome all your life!"
— Jacque Fresco
Advertisement:

A town enclosed under a dome.

Features seem to include letting everyone on the outside go to hell, being a paranoid City in a Bottle, and ending up as a Doomed domed hometown.

Fairly traditional for Underwater Cities or space colonies in SF. An Underground City may or may not have one holding up the roof and/or simulating a sky.

Subtrope of Wall Around the World. Not to be confused with a Doomed Hometown, which this trope's name is a snowclone of, though it is possible for them to overlap.