Literature / The City and the Stars 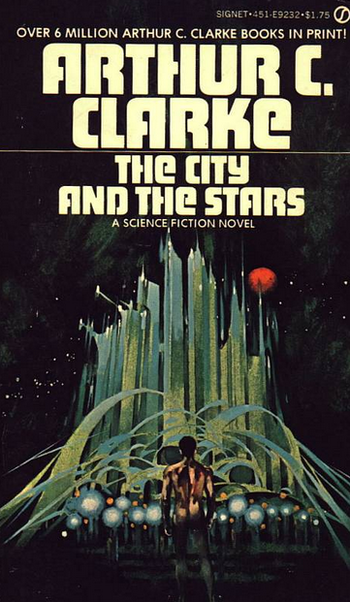 The City and the Stars is a novel written by Arthur C. Clarke in 1956, and is a major rewrite of Against the Fall of Night, his novel debut.
Advertisement:

Millions of years into the future, Diaspar stands as the last apparent bastion of humanity in a hostile universe. Mankind once spread out in a great interstellar empire, but after a millennia-long war they were driven back to Earth and eventually confined to Diaspar, which cut itself off from the rest of the world to preserve itself against the Invaders while the rest of the planet slowly withered away over the eons. Despite its isolation, Diaspar isn't an uncomfortable place to live: Humanity has managed to achieve functional immortality by means of Brain Uploading and longevity treatments, while highly advanced matter replication allows its citizens to lead lives of almost complete leisure and a dedicated Central Computer manages the maintenance down to the molecular level.

While everyone else in Diaspar is content to live in this splendid isolation, Alvin yearns for adventure. Unlike the other citizens of Diaspar, Alvin is a Unique — he was "born" as a completely new person, rather than being reincarnated from a preexisting personality stored in the Halls of Creation. Furthermore, he seems to have none of the psychological blocks that prevent the other residents from even thinking about leaving the city. With the help of Khedron, Diaspar's Jester, Alvin manages to find a way out into the wider world and discovers the land of Lys, another remnant of humanity that has chosen to reject Diaspar's reliance on high technology in favor of a more pastoral lifestyle. Yet even Lys is not quite as idyllic as it may seem at first...