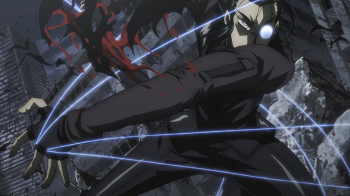 "How did I get roped into this again?"
"The softest thing in the world dashes against and overcomes the hardest; that which has no [substantial] existence enters where there is no crevice."
— Lao-tzu, Tao Te Ching
Advertisement:

Razor floss is when any long, thin material — string, thread, fine wire, etc — is used as a weapon with Absurd Cutting Power (for which it is a subtrope). Odd as it may sound, strings can become deadly weapons in the right hands. Besides restraining enemies and even controlling other people's bodies against their will, or triggering traps, they can be pretty handy for cutting. In many works of fiction, one skilled enough can use strings to cut opponents or even boulders, without hurting themselves. Naturally, monsters of the humanoid arachnid variety can usually be counted on to be using this trope.

Fantasy settings generally have this type of string made of human hair, while in more modern and future ones it's probably monomolecular wire. Spider thread is used in both. In series less reliant on the Rule of Cool, the wire usually manifests as garrotes or tripwires, with varyingly messy outcomes.

What the audience sees usually amounts to Sword Lines sans the sword. Can be counted on to inflict an absurdly Clean Cut on its victims.

In reality, cables and metal wires can be used to inflict not so clean but still pretty nasty wounds, provided they are of the right material and/or sufficient force is applied. Cheese slicers frequently use thin metal wires stretched in a metal frame to accomplish this trope, for instance. The monomolecular form is an eternal dream of materials engineering: any material with enough tensile strength to be used as razor floss could be woven into cables of the sort needed to build a Space Elevator. note Carbon nanotubes could fit the bill if some hitches can be solved: production defects involving single atoms out of place can cut their strength by up to 85%

A rarely addressed aspect of the trope occurs when the razor floss breaks or is cut. In such situations it may snap back at the user like a rubber band.

One of Xero's many weapons, formed from his own blood. Capable of slashing and grappling, with a maximum range of 50 metres when overclocked.

One of Xero's many weapons, formed from his own blood. Capable of slashing and grappling, with a maximum range of 50 metres when overclocked.