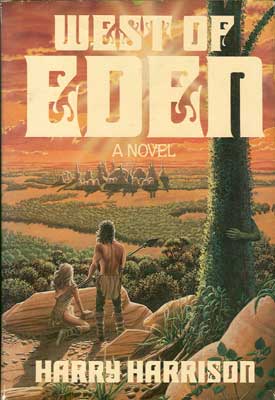 West of Eden is a 1984 science fiction novel by Harry Harrison, followed by two sequels: Winter in Eden and Return to Eden.
Advertisement:

Set in an Alternate History where dinosaurs never went extinct (outside of North America, where modern mammals and eventually humans evolved), the story centers around the conflict between humans and the Yilanè, a race of intelligent amphibious reptiles. The main character, Kerrick, is a human who was raised by Yilanè from childhood after his tribe was wiped out by them. He eventually flees and returns to his people, where he must reacquaint himself with a life he no longer remembers and deal with the suspicions and fears his strange ways cause, while the fallout from his escape reverberates throughout the Yilanè city and influences the fate of its leader.

In Winter in Eden, Kerrick and his lover Armun travel into the frigid northlands and meet the playful, promiscuous Paramutan people, while the cultural and military shifts resulting from the previous book's events continue amongst the Yilanè, threatening to completely destabilize their ways of life.

Return to Eden revolves around the tensions between the humans and Yilanè reaching a boiling point, as Kerrick and his people confront his former captor, now dangerously deranged and bent on the destruction of him and all his kind.