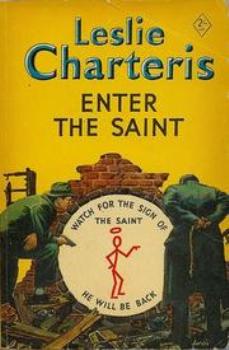 Enter the Saint, the first novel in the series... that Leslie Charteris was willing to acknowledge.note The first Saint novel was actually Meet the Tiger, but Charteris tended to discount it as a false start, though he still allowed it to be reprinted with the rest.
Advertisement:

In 1928, Leslie Charteris had his third stand-alone novel, Meet the Tiger, published. Afterwards, Charteris selected the hero as the strongest of the three protagonists he'd created, and embarked on what he hoped would be a series of tales. The choice was a good one: Charteris would chronicle the adventures of The Saint until 1983. (The character's success in print — short stories, novellas and novels in roughly equal measure — led to many adaptations in other media.)

Our hero, Simon Templar, is significantly better known by his nickname "the Saint." The origins of his nom de guerre are uncertain, other than the coincidence of his initials, but it is certain that his heroic exploits fly in the face of a nefarious reputation. Like Raffles and Arsène Lupin before him, Simon is a thoroughgoing, unrepentant and in fact joyful criminal. The Saint is a past master at every way (that existed in his time) of illegally separating marks from their money. Police on multiple continents, including and especially Chief Inspector Claud Eustace Teal of Scotland Yard, have done their futile best to bring in the Saint — while at the same time owing some of their biggest arrests to the assistance of Simon Templar.

This unusual relationship to law enforcement is because Simon's unique moral philosophy places him completely on the side of the, well, saints. His usual targets are referred to collectively, by him, as the "Ungodly". Some are obvious evildoers, including gangsters, murderers and, from roughly 1939-1945, the agents of the Axis. Others of the Ungodly, however, are known as such only to the Saint and his friends; these include corrupt politicians, crooked business men, and (before 1939) warmongering arms dealers. The fortunate Ungodly escape merely with vastly-reduced ill-gotten fortunes; the Saint donates a percentage of his score to charity, and the remainder to himself and his partners in crime. This obviously leads to comparisons, both favorable and otherwise, to Robin Hood. As for the unfortunate Ungodly — well, when his singular code of ethics demands it, Templar is willing to go much further, all the way up to Vigilante Execution when necessary.

Initially, Templar was usually depicted as working with a number of other adventurous young men: right-hand-man Roger Conway, hot-blooded lady-killer Richard "Dicky" Tremayne, technical wizard Archie Sheridan, and doomed hero Norman Kent. Occasionally, the team included his Old Retainer Orace, though mainly in a background/support role. And, very often, Templar heavily relied on his true love, Patricia Holm, who was far more competent than the average heroine of her day. During this period, although the Saint could and did operate internationally, the series was strongly centered around Great Britain, and especially London — the closest thing the Saint has to a home town.

By the mid-1930s, Conway, Tremayne, Sheridan, and Kent had left the field. Templar carried on with Patricia and two new associates whom he acquired in the course of adventures. Peter Quentin was, at first, a law abiding citizen whom Simon saves from a vicious confidence scheme, and who as a result became a reliable first mate to the Saint's buccaneering. At almost the same time, Simon's most unusual associate, good old Hoppy Uniatz, joined the merry crew. Mr. Uniatz was a not-overly-bright but unswervingly loyal and courageous, not to mention handy with a Colt 1911 semi-auto, veteran of the Prohibition-era NYC underworld. He was also (according to Charteris) the first Breakout Character in the series, to the point that as the series went on, Simon would often appear with only Hoppy as support. The Saint also left the UK more often during this time, especially as his wartime exploits demanded.

Roughly from the beginning of the 1950s, though, even Hoppy had moved on. The Saint was left, essentially, a lone wolf. His solo status also seemingly cut the final threads holding him to England; for the last 20 years of the series, Simon was a true globetrotter, and stories set in London Town became far more the exception than the rule.

Beginning in the 1960s, Charteris occasionally updated stories for reprints, replacing outdated references to topical matters such as pop culture and politics with more modern examples. In the 1970s, he stopped doing that; as with Sherlock Holmes, to which series he directly referred, Charteris believed that part of the charm of the stories was their evocation of their time period.

Charteris wrote all the stories and novels published between 1928 and 1963. From 1964 onwards other writers took over and continued writing stories (many of which adapted episodes of The Saint and Return Of The Saint from TV). These writers were usually credited inside the books, but Charteris received sole credit on the covers. The final Saint novel in the original run was published in 1983.

he will be back