Literature / The Saga of the Noble Dead 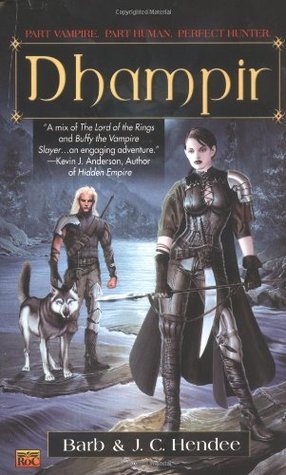 Series of novels by Barb and JC Hendee. Basically, Vampire Fiction meets High Fantasy meets Dark Fantasy, with some twists along the way. Main protagonist Magiere is a Dhampyr (born of human and vampire) and a supernaturally powerful hunter of the undead, charging exorbitant fees to protect the countryside peasants from all manner of things that should have remained in the grave- or is she?

The truth is, Magiere and her half-elf partner Leesil are con-artists, taking advantage of peoples' gullibility to make a living (he plays the vampire and she dramatically "slays" him). After saving up enough money, they decide to retire to a sleepy port town and open an inn- but a chance encounter with a real vampire sets much larger events in motion, and Magiere winds up having to really become the thing she's pretended to be for years. It gradually becomes apparent, however, that there are much more dangerous things out there than the living dead, and some of them have taken an interest in the protagonists' doings...

The series is divided into arcs, which tell largely self-contained stories while advancing the overall plot. The series is currently complete at 14 books taking place across three arcs.

First Arc:
Dhampir
Thief of Lives
Sister of the Dead
Traitor to the Blood
Rebel Fay
Child of a Dead God
Second Arc:
In Shade and Shadow
Through Stone and Sea
Of Truth and Beasts
Third Arc:
Between Their Worlds
The Dog in the Dark
A Wind in the Night
First and Last Sorcerer
The Night Voice

A number of e-book novellas that are not directly part of the Myth Arc but further flesh out the world have been released, and Barb Hendee is currently releasing The Mist-Torn Witches, a spin-off series set in the same world; this series is much smaller-scale and more episodic in nature, following a pair of sisters who serve as court seers to a prince in Droevinka (Magiere's homeland).

A second spin-off by both Hendees, The Dead Seekers, had its first installment released in January 2017.