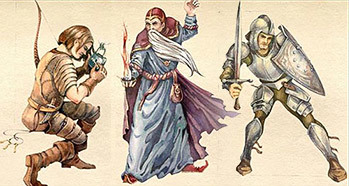 Most computer and Tabletop RPGs offer the player a number of classes or specializations that they can choose. When you think about it, however, most boil down to three major archetypes for character specialization regardless of what they are called. These are:

Some games allocate the skillsets differently, with the thief being the squishiest and having the highest damage potential and the mage being middle of the road (usually on the logic that if the thief could take a hit and the mage couldn't, then the thief wouldn't be the one doing all the hiding), for example. Some systems might use fantasy rock-paper-scissors instead of letting each class have their own strengths and weaknesses depending on situation, in which case, generally speaking, fighter bashes thief, mage blasts fighter, and thief blindsides mage.

Likely, there will be builds that allow the player to mix and match elements of the three paths, but usually it boils down to strength, finesse, and sorcery.

This trend stretches back to the grandpappy of all RPGs, Dungeons & Dragons. First edition offered players three main character classes: Fighter (called the Fighting Man at first), Magic User, and Cleric (who healed the party, and also dubbed as back-up fighter and/or mage), with the Thief being added soon after in the Greyhawk supplement. A standard D&D adventure is constructed for a 4-man party consisting of fighter, cleric, wizard, and rogue or their functional equivalents. A lot of RPGs have followed in their footsteps.

In a playstyle-based Freudian Trio, typically the hard-hitting, battle-oriented Fighter serves as the Id. A knowledgable, superstitous Mage serving as the Superego. Leaving the tricky, self-serving Thief as the Ego. Of course this isn't always the case.

Among a Beauty, Brains, and Brawn trio (regardless of gender), typically the Thief with their subtle, agile (and sometimes flashy) playstyle is the Beauty. The Mage whose core power comes from knowledge and intellect are the Brains. With the Fighter, often brandishing the biggest weapons and strongest physical strength is of course the Brawn.

Sub-Trope to Three Approach System. Compare Combat, Diplomacy, Stealth, Damager, Healer, Tank, and Physical, Mystical, Technological for other party trios. See also An Adventurer Is You for a breakdown of the party-based RPG (especially the MMORPG); as well as Action Hero, Science Hero, and Guile Hero.