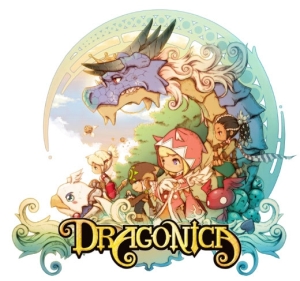 Dragonica, also known as Dragon Saga in North America, is a side-scrolling MMORPG featuring anime-style graphics, combo systems, the classic "Save the World" plot, four basic classes (Warrior, Mage, Archer, Thief), and finally a truck load of skills which generally go along the lines of Over-the-Top Humorous and Extremely Devastating.

In the land of Dragonica, 50 years ago, an Evil Dragon named Elga threatened to cover the land in complete darkness using the five elements of the Earth to do so. Thousands followed Elga simply out of fear, but Five Heroes (Belkan, Pamir, Mirinae, Skypie, and Paris) and the Lord of all Dragons rise up against his tyrannical rule and seal him inside a giant mountain where his powers are forever rendered useless by the numerous mechanical and magical devices that serve to render it both physically and magically impossible for him to escape. Peace reigned through the land as Elga was finally sealed, and the Five Heroes of the Land continued to make grand adventures, saving the world from any evil that may come their way.

50 years later, Elga has been released from his extremely large, very complex, yet poorly guarded Mountain Prison by a mysterious figure. Re-released and full of rage, Elga seeks once more to destroy and conquer the land.

This does not, of course, escape the attention of the Government, and soon enough, the Dragon Expedition is born, their sole purpose: slay Elga and leave the world safe once more from his wrath and evil.

This part is where you come in, a brand new adventurer to the land of El Grego who decided to leave his/her respective barracks/mage tower/archery range/thieves guild, and enter the town of Odelia to join the Dragon Expedition and save the world!

... Or not, since the intros reveal that some of the heroes are in it for purely personal reasons.

All makes the game seem like one of the thousands of generic Korean fantasy MMORPGs that have been released in the last decade, but Dragonica has an ace up its sleeve: its gameplay. Barunson Interactive has taken the platforming elements that made Maplestory a smash hit and has literally added a new dimension to it, with characters and enemies being able to move towards and away from the screen in addition to up, down, left and right. Combat has also been sped up considerably and the action is almost twice as fast as that earlier game. Finally, the various English translations are also rather tongue-in-cheek, with some NPCs displaying humorous levels of Medium Awareness.