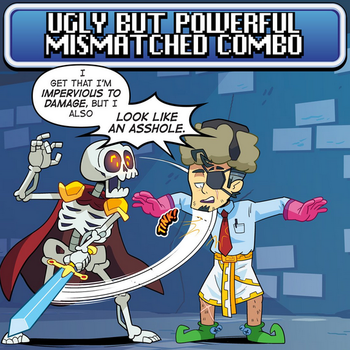 Haley: ...so the Boots of Speed were totally powerful, but they were, like, lime green.
Vaarsuvius: Indeed. A most grave conundrum you faced.
— The Order of the Stick, strip #3

Rainbow Pimp Gear is what happens in a video game when players equip their characters with gear solely based on stat bonuses without consideration for how it will look on them. The end results tend to be... colorful, to say the least.

This tended to be much more of a problem in the past. Nowadays, developers are wise to the problem, and offer several solutions, including adjusting the colours of the items, letting you cosmetically alter them so they look like another item, implement an Equipment-Hiding Fashion slot that allows one to override the appearance of stat-affecting equipment with another piece of equipment, keep stat-affecting and appearance-affecting equipment completely separate, or have the equipment give their bonuses at all times even if you're not wearing them. One other way to counteract this is making the best possible clothing combination is by definition a set that matches (either because they all happen to be the best by design, or because they have a Set Bonus that makes them the best when worn together).

It's more than just looking like a Rummage Sale Reject — the game has to not only show the player the full clothing combination (so no Informed Equipment), but also provide a real advantage to equipping this particular clothing combination (whether intentionally or not). If a game has it really bad, it might avert No Cutscene Inventory Inertia, and your Rainbow Pimp Gear could even be seen prominently during an otherwise dramatic cutscene.

A result of applying Virtual Paper Doll effects to equipment that affects gameplay, often just overlooked per Rule of Funny. Closely related to Embarrassing but Empowering Outfit, where a single piece of clothing looks silly on its own but is worth it for the powers it grants.

Not to be confused with Pimp Duds.