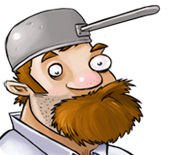 At least he makes it easy for the zombies to cook his brain.
"Ooh, whatcha gonna do? You've got a bucket on your head and a Fu Manchu!"
— The Easter Bunny to his opponent Genghis Khan, Epic Rap Battles of History
Advertisement:

A Sub-Trope of Improvised Armour; one good way to give yourself an improvised helmet is putting a bucket (either plastic, wooden or metal) over your head. Alternatively it can also be a metal pot, colander or saucepan too. It's most likely to be used by children, when either playing pretend or they actually need some kind of protection (See Weapon Jr.). You may have noticed that in real life it's hard to wear and ridiculously easy to remove because of the handle. The name may also be used as an insult.

While most examples usually wear the bucket properly (as properly as you can wear it at least) by having it above their eyes. Some examples instead wear the full bucket over their entire heads turning them into The Faceless. With only an eye hole/slit or two to see out of, although for Rule of Funny sometimes there is no eyeholes to see out of.

See also Cool Helmet. Not to be confused with the late Medieval great helm, which is sometimes called a bucket helm because of its shape but unlike the improvised variety is not actually made from a bucket.