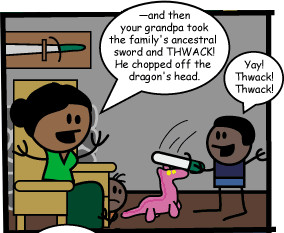 In real life weapons are similar to music instruments... no, not like that. What we mean is, no matter what someone's Weapon of Choice may be, using it is a finely honed art that they must practice, to the point where using another weapon might prove problematic.

In fictionland, however, if someone with an Iconic Item Weapon of Choice is shown as a child, has a child or meets a younger counterpart (a fanboy who wants to grow up to be just like them, perhaps) then you can expect them to own a toy or weapon with some perceived similarity to it.

The nature of this "Weapon Jr." and how functional it is can vary. It might be a literal toy version (wooden swords are popular, as are more high tech toys, like dart guns) or it might be an actual weapon that people wouldn't mind a kid having (Brats With Sling Shots, Slings, etc) which might actually be dangerous in Real Life (but not necessarily in fictionland). Whether it's just kids playing at soldiers, or children actually being forced into combat depends on the series.

Some stock examples of Weapon Jr. include:

Specifically designed training weapons can also count if they're in the hands of children.

If this is used in a flashback, expect it to be milked for "Used to Be a Sweet Kid" points if they aren't an Enfant Terrible. If older versions of the protagonists using more advanced "weapons" show up then it's Generation Xerox or Future Badass. A video game might have your character wield them in a Justified Tutorial. In an RPG they might serve as Starter Equipment. May be wielded by a Kid Sidekick. This can be either a Call-Forward or Foreshadowing depending on when it's revealed who the child in question grows up to be. If children are actually being given weapons to played with (as toys or not) then it's My Little Panzer (although it still counts as this trope if the owner of it "upgrades" when they're older). Often turns up in A Minor Kidroduction and overlaps with Early Personality Signs.