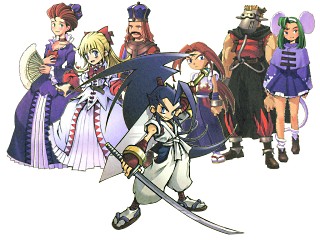 The kingdom is saved, thanks to Sir Little Tur... er, Musashi.
Advertisement:

Probably the loosest interpretation ever of the legendary antics of Japanese swordsman Miyamoto Musashi, Squaresoft's 1998 Brave Fencer Musashi (Japanese: Brave Fencer Musashiden, literally Brave Fencer: The Legend of Musashi) for the original PlayStation shrinks the wandering samurai to Fun Size, transports him into a fantasy world full of Woolseyisms, and sets him off on a quest to save the besieged Allucaneet Kingdom by unsealing Lumina, the Sword of Luminescence, reabsorbing its scattered powers from within the Five Scrolls, and collecting action figures of the friends and foes he meets during his exploits. We mean, bashing in the heads of the Thirstquencher Empire's goons until they learn not to underestimate him for being short.

Musashi Samurai Legend is a follow-up released on the PlayStation 2.