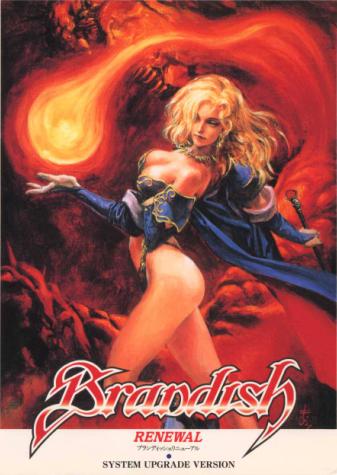 Brandish is an Action RPG series by Falcom, which currently consists of four main games. It is notable for having a rotatable "camera" despite having entirely 2D gameplay, thus allowing the player to do things like circle strafing, hit and run attacks, and other typically 3D techniques.

The original game was released in 1991 for the PC-98 and FM Towns, before being ported to the Super Nintendo Entertainment System and PC Engine in 1994/1995. The first Brandish was the only entry of the series ever released in other countries (with the SNES version being the only English language version available), and with great alterations at that. Its story starts with the protagonist, Ares, being ambushed by the mage Dela Delon, who aims to avenge her evil wizard master, killed by Ares in the game's backstory. While battling, one of Dela Delon's spells breaks open the ground, sending them both into a deep labyrinth. Now, Ares must figure out a way to escape.

Brandish 2: The Planet Buster was originally released on the PC-98 in 1993, and was then ported to the SNES in 1994/1995. Brandish 3: Spirit of Balcan was developed in 1994, again for the PC-98. Both of these sequels again centered on Ares and Dela. All three games would later receive Renewal versions exclusive to the PC-98, featuring gameplay balances, an arranged soundtrack (complete with additional music), and new cover art courtesy of Jun Suemi (see the page image).

A fourth installment, Brandish VT: Fata Morgana Templum, followed in 1996, once more for the PC-98, with its port for Windows computers titled Brandish 4: The Tower of Sleeping God. While it retained the series' gameplay and graphics despite switching from an overhead perspective to an isometric one, the storyline was very different. This is because the fourth game was originally envisioned as a brand new IP known as Victim's Tower, with Falcom retooling it after realizing the interface and basic gameplay were similar to the previous three Brandish installments. The "VT" in the title is a nod to the original concept, with the titular Fata Morgana Templum/Tower of the Sleeping God (a giant tower in the middle of the desert) also known in-game as the Victim's Tower. The fourth game is also notable for its implementation of a Good-Neutral-Evil alignment system and Multiple Endings based on the player's alignment, not unlike the mainline Shin Megami Tensei games.

In 2009, the first Brandish would be remade for the PSP as Brandish: The Dark Revenant, being fully 3D but retaining the same rotatable camera system of the original; XSEED Games would handle localization of The Dark Revenant for the North American and PAL regions in 2015. Dela would also appear as a Guest Fighter in 2010's Ys vs. Sora no Kiseki: Alternative Saga, serving as a support character and the game's sole representative for her home series.

of a Fan Translation of the second game's Super Famicom version (handled by Synchronicity Translations), with another

(this time based on Brandish 2 Renewal and translated by a team led by Gu4n and preta) releasing in 2017. Gu4n additionally worked on a translation patch

for Brandish 4, though only the Lawful route of Dee's story is finished and there are no current plans to fully translate the game.