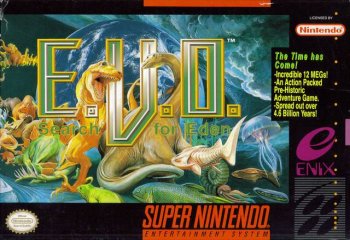 About 4.6 billion years ago, the "Sun" had nine smaller stars and named the third one "Gaia".

The Sun: My dear Gaia! Please listen to me. From this time forward, every 1 billion years, you will have children called "Life". One of them will be able to help you to build a new era. Each child must endure a difficult trial. You might think it's too severe, but it is necessary. The trial is a test of Nature: "The survival of the fittest". If he passes, I will allow him to be your partner and to enter Eden.
Advertisement:

A very unusual and highly obscure Action RPG for the SNES, in which you play a creature which evolves in order to survive the dangerous prehistoric world and eventually to join Gaia, a personification of Earth, in Eden. However the evolutionary process has been disrupted, and it is slowly revealed that there is an overwhelming force behind this.

The game is actually a sequel to/sort-of remake of 46 Okunen Monogatari: The Shinkaron ("The Tale of 46 Hundred Million Years: The Theory of Evolution") an even more obscure Japan-only PC-98 Eastern RPG based on the same premise. A Fan Translation came out in 2017, combining its title with the SNES game's English title to form E.V.O.: Theory of Evolution.

While the game received little attention upon its release, it has since become a cult classic and is now considered a pioneer of the evolution gaming genre. It is noted for its unique gameplay system, sprawling world and its epic, eon-spanning scale.

It was developed by a small company called Almanic, under the publishing of Enix.

Has a developing character sheet. Please contribute, especially if you've played the original.

See also Spore, in which the Creature phase had drawn several comparisons with this game.

Not to be confused with the fighting game tournament, EVO.